The Launch of " The Other Side of the Story: Perpetrators in Change" (OOSPC) project

Ever since domestic violence has gained prominence on the EU social policy agenda, the focus of interventions has been on women victims and on children securing their safety through removing them from a harmful environment. Far less attention has been given to domestic violence perpetrators, despite research showing many of them repeat their violence in future relationships… Perpetrator programmes play a crucial role in breaking the cycle of violence and re-offending. However, although such programmes remain a crucial part of victim safety and coordinated community responses, they have received less support and less attention by scholars than other parts of the domestic violence system. Most abusive men will not change their behavior without outside, structured, mandatory intervention and women and children will still be in danger if action is not taken regarding this side of the story: The Perpetrators

"The Other Side of the Story: Perpetrators in Change" (OOSPC) project was launched on May 1st, 2020 and will be implemented by: The Association for the Prevention and Handling of Violence in the Family - APHVF, Cyprus as Coordinator and its partners, Bournemouth University (BU)- United Kingdom, Centro di Ascolto Uomini Maltrattanti Onlus- CAM, Italy, The Union of Women Associations of Heraklion Prefecture- UWAH, Greece, European Knowledge Spot, Greece and Direcția de Asistență Socială și Medicală, Cluj-Napoca-DASM.

The specific objectives of the OSSPC project, are to:

• Facilitate national agencies and/or community-based organizations in formulating or re– formulating action plans for better and more effective response to domestic violence through the provision of evidence-based research on the effectiveness of perpetrator programmes.

• Train 300 frontline workers and increase their competences by developing an effective capacity-building methodology and a corresponding training package.

• Increase awareness on the importance of effective and high-quality information sharing as well as timely safeguarding response through the organization of regional roundtable meetings with 100 professionals and at least 50 agencies which will adhere to Protocol guidelines. The expected results of the project are:

• Improved awareness on the need of perpetrator programmes as an important element of an integrated/comprehensive approach to preventing and combating violence against women.

• Increased knowledge and understanding of frontline workers of the dynamics behind domestic violence and abuse and of the typical beliefs, values and tactics of perpetrators.

• Strengthened multi agency collaboration in the field of the project.

• Appropriate tools will be produced and awareness raising events will be implemented to prevent abusive practices and urge the public and policy makers stand together against domestic violence. The project is co-funded by the Rights, Equality and Citizenship Programme (REC) of the European Union (2014-2020). The implementation period of the project is 24 months (01.05.2020-30.04.2022) and the approved budget of the project is 505543. Euro, with a European Union contribution of 80%, 404434. Euro. For further information please contact: 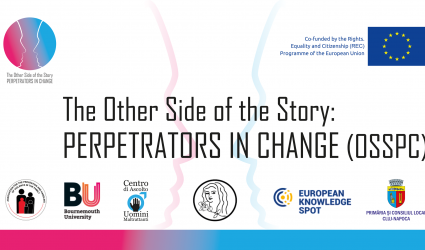